If you are from the manufacturing or construction industries, the term “collets” is probably familiar to you. There are many types of collets used in many different industries and applications. For this article, we shall focus on collets used in rotary tool holders typically found in CNC machining (milling) centers.

Before we get into the nuances of collets, it is vital to understand how collets work, what impacts their performance, how to maintain collets for long service life, and how to recognize when to replace them.

Collets are the critical connection between the cutting tool and the tool holder (also called a collet chuck). Most collets are round, cone-shaped, and slotted. Collets encircle the cutting tool shank to evenly distribute holding power around its center bore. 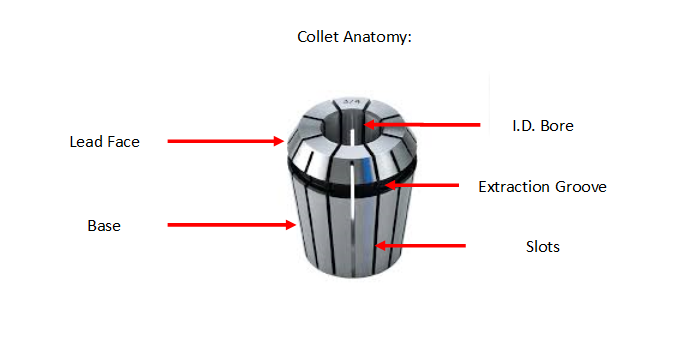 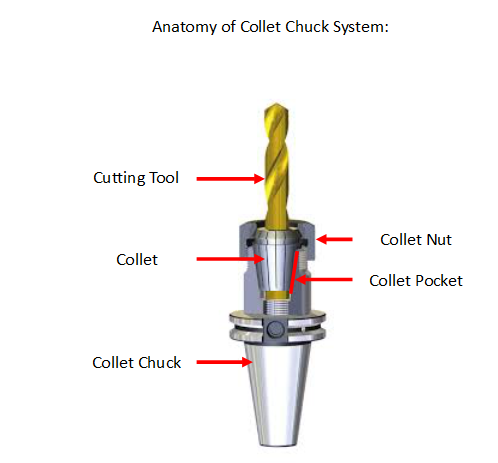 What are the different types of collets?

Collets come in many different types and sizes. Here is an overview of three of the more popular types of collets, along with the pros and cons of each system.

Double-Angle (DA) collets have been around for a long time and continue to be used in the market. There are, however, many issues associated with DA collets of which users should be aware.

One of the primary issues with DA collets is that they essentially clamp on the cutting tool shank with only two opposing faces in the I.D. bore. DA collets have four slots in the front of the collet and four slots in the back of the collet creating four clamping faces. However, when DA collets are tightened towards the lower end of their collapse range, two of the faces tend to be pushed out of the way so only two of the faces are clamping on the cutting tool shank. This may cause some runout at the nose when the tool is inspected in a presetter.

Additionally, when the tool begins cutting and side forces are applied to the cutting tool, the cutting tool tends to deflect into the area where the faces are not clamping on the tool shank. This results in excessive chatter that dramatically reduces tool life and results in rough surface finishes. You will be hard-pressed to find a quality end mill holder manufacturer endorsing the performance of their tooling in DA collets. 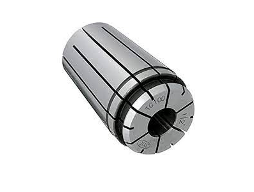 TG collets have about the same accuracy as DA collets, but because there are more slots, and therefore more faces clamping on the cutting tool shank, they tend to deliver greater holding power. TG can be a good solution for larger shank diameter cutting tools, but they generally limit how far down into a pocket you can reach due to interference with the collet nut, as TG collet nuts tend to be quite large.

TG collets are not as popular as ER collets for several reasons. Most notably, the larger diameter collet nuts can require the use of extended end mills to avoid interference from the collet nut when milling pockets. Also, since TG collets have a very small collapse range, they are intended for use with one size cutting tool shank. ER collets, by contrast, offer a large collapse range that can be helpful when clamping odd-shank diameter tools.

On the flip side, TG collets tend to have a bit more holding power than ER collets due to the collet base having a 4° taper as opposed to the 8° taper found in ER collets. This can make TG collets a good choice when machining with longer-length cutting tools.

The ER collet system has become very popular due to the flexibility of the system to hold a variety of cutting tool shank types including drills, end mills, and taps. Also, ER collets provide several solutions for increasingly popular coolant-through cutting tools.

The popularity of the ER collet system has led to several variations to hold a wide assortment of cutting tool shanks. Some ER collets have been modified with squares at the bottom to hold taps. Others have been modified to provide quick-change capabilities or compensation (also called “float”) for rigid tapping cycles as shown in the images below.

Other modifications include special slotting designs that seal around the cutting tool shank and force coolant through channels in coolant-through tooling, as well as modifications to include coolant ports in the collet that direct coolant to the cutting area.

Collets are a high-precision wear component of a tool holding system and require maintenance to ensure accuracy. First, it’s important to remember that collets are the softest component in a collet-based tool-holding system assembly and are designed to wear out.

Here is an overview of the wear pattern of a collet-based tool-holding system. The machine spindle is harder than the tool holder (a.k.a. collet chuck) that fits into the spindle, so any wear between these two components will mostly occur to the collet chuck. That’s good, as it protects the spindle from expensive maintenance. Collets are softer than both the collet chuck body and the cutting tool, so any wear forces between these items will mostly occur to the collet. Since collets are generally the least expensive component in a collet chuck tool holding system, it is preferred that the collets wear out before the other components.

Worn-out collets will not achieve the same level of accuracy and rigidity that newer collets can provide. The result is more chatter when cutting workpieces, less accuracy, and shorter cutting tool life. A good rule of thumb is to replace collets every 4-6 months to maximize the performance of your tooling. Again, collets are designed to wear out and are generally the least expensive component in the system. It is much less expensive to replace the collets as opposed to prematurely wearing out cutting tools.

The following tips will help you in maintaining collets:

Given the wide range of benefits offered by collets, they are one of the most indispensable tools in the manufacturing industry. To get the most from your collet-based tooling system, it is important to use best-in-class products to produce top-notch quality.

This is exactly where Techniks Tool Group can help! Offering a wide range of collets and collet chucks, our experts will help guide you to the best solution for your needs. Our collets are trusted by some of the largest manufacturers in the world. Check out our collets and get started on your journey!

1. How do I know when to replace collets?

Collets are designed to wear out as they lose accuracy and rigidity with use. High side-load forces during milling operations cause cutting tool deflection as illustrated below.

Over time, these side-load forces will bell-mouth the collet at its face.

As the collet experiences bell-mouthing, the cutting tool is allowed to deflect more and more during milling operations. Unfortunately, the collet may still indicate good accuracy on a presetter where there are no side-load forces. However, once the tool is put into service and begins experiencing side-load forces, the cutting tool is allowed more room to deflect, resulting in increased chatter and reduced tool life.

It is recommended to change collets out every 4-6 months, depending on usage, to ensure the most rigid and accurate collet chuck assembly.

2. Are there other signs that a collet should be replaced?

Yes. Any signs of fretting on the collet indicate the collet is vibrating in the tool holder. Fretting appears as rust-colored spots typically at the highest point where the collet sits in the collet pocket of the collet chuck. 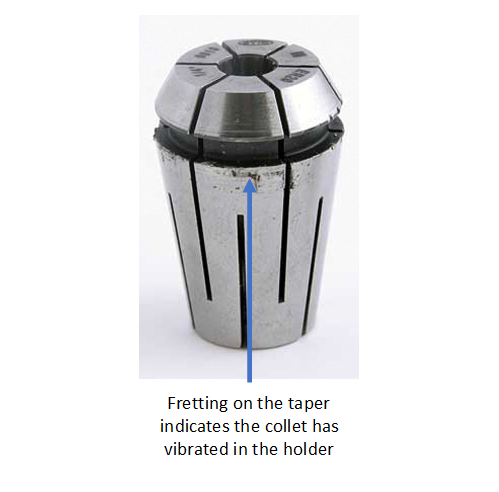 This is not rust but rather an indication that there is a vibration between the collet and the collet pocket connection. The vibration causing the fretting is also reducing cutting tool life. If you see signs of fretting on the collet, it is advised to replace the collet. You should also ensure that collet nuts are tightened to the correct torque specifications during setup.

3. What is the correct method to assemble a collet and collet nut? 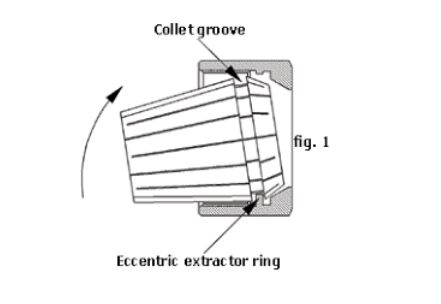 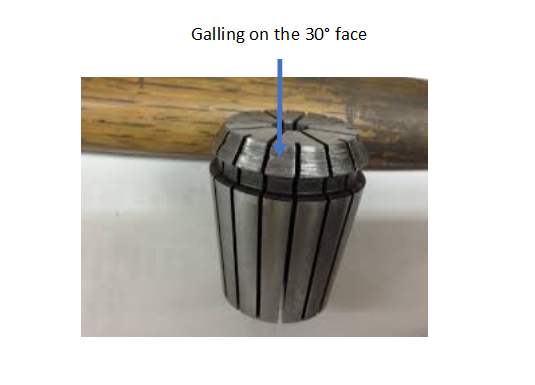 When trying to ensure the most rigid and accurate collet chuck assembly, don’t take chances.

When in doubt, throw it out!

Remember, the collet is designed to wear out and is the least expensive component in a collet chuck system.