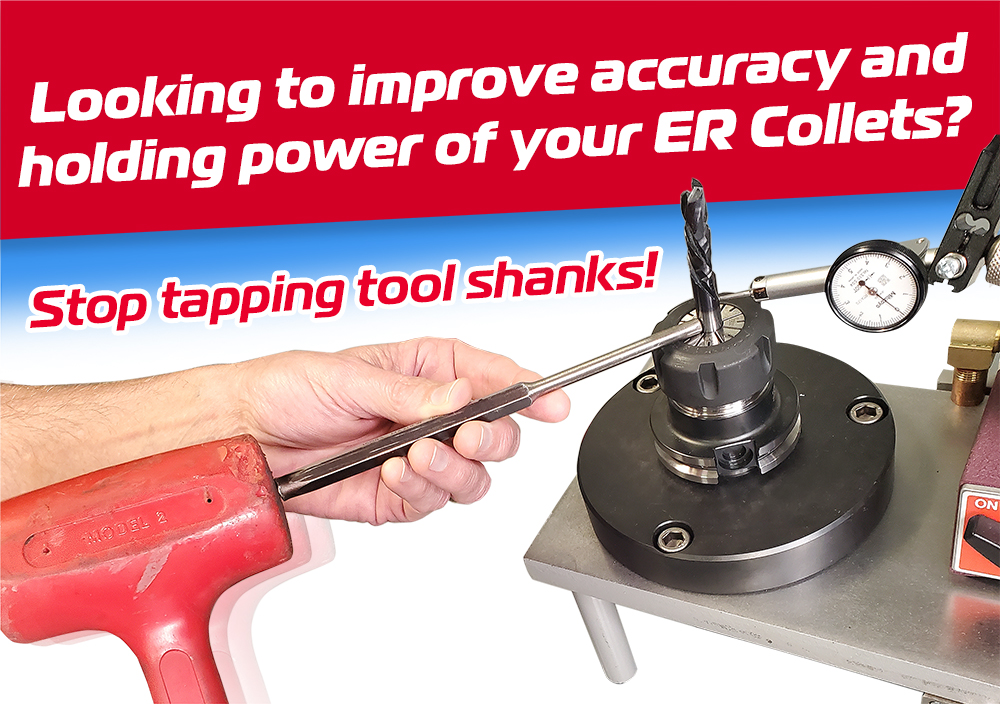 The ER collet system is a tried-and-true tool holding system used by just about every machine shop. Customers like the ability to meet almost any job from drilling to milling to tapping and the flexibility to hold a variety of shank diameters by just changing the bore size of the collet. However, achieving optimal clamping pressure and repeatable accuracy are challenges that have resulted in some “creative solutions”. We’ve seen it all. From cheater bars to provide additional torque on the collet nuts to tapping tool shanks for better accuracy.

In this article we will dissect what’s going on with the ER collet system that creates these challenges and why these “creative solutions” actually work against improving holding power and accuracy. Finally, we will explore the unique solutions Techniks Tool Group has develop to counter the shortcomings of ER collet system including the revolutionary new Parlec P3 collets.

We’ve all seen it. It’s time to setup an ER collet chuck and out comes the cheater bar to tighten the collet nut. Why do shops feel the need to use cheater bars to adequately tighten collet nuts? Well, no one wants to under tighten a collet nut for fear of the cutting tool coming loose during operation potentially requiring re-work, producing scrap, or worse, creating a serious safety issue. But, as we shall see, cheater bars can actually negatively affect clamping pressure and accuracy.

Cheater Bars: Who Needs Them? NOBODY!

Cheater bars are an attempt to overcome one of the largest challenges of the ER collet system – friction. Friction robs the ER collet system of clamping pressure and can create inconsistent run-out of the cutting tool. Friction occurs between all mating surfaces of the ER tool holder assembly, most notably between the threads of the collet nut and the tool holder and between the collet nut and the 30° face of the collet.

When using a torque wrench, the buildup of friction between the threads will cause the torque wrench to indicate the proper torque value has been achieved. However, the actual torque being transferred to the cutting tool shank in the form of clamping pressure may be far less than anticipated or required for optimal holding power.

To see a demonstration of how the friction robs the ER collet chuck assembly of holding power, click here.

Shops have been using the extra leverage cheater bars provide to overcome the friction buildup between the nut and holder threads in order to increase the clamping pressure on the cutting tool. However, there is no control over how much torque is actually being produced. Without control, there can be no consistency.

In fact, cheater bars often result in too much torque that can create a host of issues like cracked collet pockets in the holders, cracked collets, and inconsistent run-out.

The first line of defense to ensure proper torque and setup of an ER collet chuck is a torque wrench. Torque wrenches are the “great equalizers”. Everyone, regardless of strength or size, can achieve the same torque on the collet nut with repeatable results. Shops looking to improve consistency should throw away their cheater bars and incorporate torque wrenches in their ER tooling setup.

Back to the Threads

To see a demonstration of the superior holding power of the Power-Coat nuts, click here.

In addition to optimal clamping pressure, shops often struggle with achieving consistent accuracy from their ER tooling. It seems that one setup will produce good accuracy, while just loosening and retightening the collet nut will result in poor accuracy. To correct this, some operators tap the cutting tool shank until the desired accuracy is achieved. What’s going on?

However, the collet nut must be further tightened to achieve the proper torque specification. As the collet nut continues to rotate, friction builds-up between the now stationary 30° collet face and the collet nut. This friction twists the top of the collet, causing radial distortion.

Think of having your feet buried while someone is turning your shoulders. Eventually, your spine will twist and break. Ouch! This radial distortion produces uneven clamping pressure around the tool shank reduces clamping pressure and creates accuracy issues.

To correct for poor accuracy, some operators will tap the tool shank to bring it into the desired accuracy. However, just tapping the tool shank into tolerance does not solve for the uneven clamping pressure resulting from twisting the top of the collet.  Once the machining starts, the tool shank will find its point of lowest energy and will, once again, move out of tolerance.

The result? Improved clamping pressure on the tool shank and improved accuracy. No tapping required!

For the ultimate in accuracy, Parlec offers the ERos ER system. ERos collet chucks (ERos = ER on-size) are proudly Made-in-the-USA and feature several design improvements that enhance the performance you can expect an ER tooling setup.

ERos chucks and nuts have two pilots to more concentrically align the nut on the holder further improving accuracy. ERos collet nuts do not have any slots, reducing wind vibration at high spindle speeds. Also, the ERos collet nuts have a concentric extraction ring to remove the collet from the holder creating a superior balanced assembly. While the ERos system will improve the performance of standard ER collets, when combined with P3 collets, the ERos system produces results that some of our customers say exceeds that of shrink fit or hydraulic chucks.

These are just a few of the technologies Techniks Tool Group has developed to overcome some of the challenges of the ER collet system and achieve superior results.

For help with your specific application, give the experts at Techniks Tool Group a call at (800) 803-8000 or email us at info@techniksusa.com.